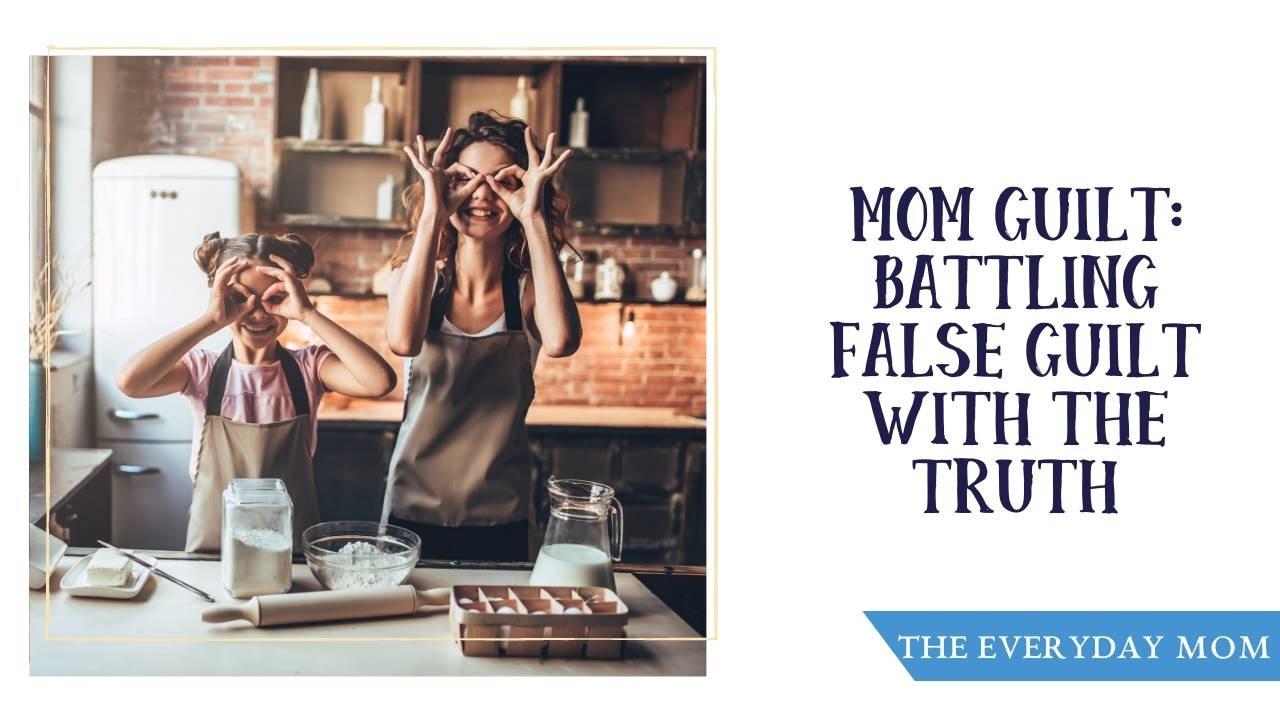 I am no stranger to mom guilt. We met when Grace was just a newborn and I accidentally scratched the entire length of her calf when changing her diaper. I cried for five solid minutes. And I turned crimson when the pediatrician asked about it at her next visit. Don’t worry, the doctor was kind and reassuring, and the scratch healed quickly. But that first taste of mom guilt lingered.

Isn’t it crazy how our parenting mistakes stick with us? Even something as simple as a scratch—not an intentional wrong, not even an action done out of anger—can cause us to judge and second-guess ourselves. This is no way to live, friends, and today I want us to tackle the mom guilt monster together.

I wish I could say that was my last—or even my worst—battle with mom guilt. But no. In fact, I spent too many years consumed by it. When Grace was a preschooler, I began to see some familiar traits and struggles, things I wrestled with and had either overcome or had been very careful not to model for her. I blamed myself. Jon and I went through two years of infertility before I had a laparoscopy that allowed us to get pregnant, and I thought God had wanted to spare a child from having to be like me… but I had messed it up by insisting on having a baby. (Spoiler alert: that’s not true. Grace was made in God’s image, not mine. Also, a housewife from Ohio is not likely to thwart God’s plans with an outpatient surgery. Just saying.)

Then over the past few years, I have watched my kids fight battles I was certain were my fault. If only I had parented them differently when they were younger, if only I had put them in a different school, if only I hadn’t missed that darn basketball signup in the third grade…! Guilt and shame absolutely plagued me, convincing me that my kids were suffering for my shortcomings. It sounds ridiculous, I know, but I pleaded with God to turn back time, to let me redo those early years of parenting. I was certain I could do things better so they wouldn’t struggle this time around.

Can I be honest with you here, friends? We all make mistakes. Perfect parents don’t exist. And yes, sometimes our mistakes will have consequences that extend to our children. But we can’t turn back the clock, we can only move forward. And dwelling on the “if onlys” in life will rob us of future joy. (Also, sometimes life is just hard. We know that’s true for ourselves, but we try to make it not true for our kids. That is sheer futility. They will experience hardships, whether as a result of their own choices, someone else’s, or just a tough circumstance with no one to blame.)

So what do we do with this mom guilt that weighs us down? Well, guilt serves a purpose, so let’s start there. Just like a burning sensation in your arm might let you know that you are leaning too close to the stovetop, guilt is a warning: “Hey! Something doesn’t feel right! Take a closer look!” Guilt calls for us to examine our hearts, our words, and our actions to see if we actually committed any wrongs that need to be righted.

In my case, I realized I had indeed made some mistakes that impacted my kids—but I had apologized and repented (worked to change my attitude and/or behavior) when necessary. So that guilt—the true guilt—had been handled. And some of the things I felt guilty for weren’t my fault at all. I just felt powerless to change them (and I was). In other words, it was now all false guilt. But it sure didn’t feel like false anything. It felt all too real. But why? Why, if I knew I had been forgiven, did my sins and mistakes still haunt me? Why did I carry the weight of other things that weren’t even my fault? Why did I walk around with a stomachache all of the time? Why couldn’t I just let it go?

Have you ever seen the movie Inside Out? My favorite part is when the maintenance workers randomly send the memory of the toothpaste commercial to the front of poor Riley’s brain. It seems like a perfectly reasonable explanation for the arbitrary things that pop into my head! I don’t know about you, but when I get an earworm like that, I can’t get rid of it until I belt out another song loud and clear or pop in my earbuds and turn them up to a different tune that I don’t mind having stuck in my head.

Getting rid of false guilt works the same way. It doesn’t just go away on its own. In fact, left unchecked it will grow and grow until it absolutely drives us crazy—or leaves us paralyzed under the weight of a burden we shouldn’t even be carrying. When our brain reminds us of our failures, when false guilt blames us for things that aren’t our fault, we have to actively stop them in their tracks.

I have mentioned before that I am not a big fan of Positive Self-Talk, but I am a huge proponent of Positive God-Talk—that is, Scripture. Rather than just trying to say things that sound nice, I find it is much more effective to repeat verses from God’s word when I am struggling. Why? Because I know it is true. And what better way to fight false guilt than with truth?

Now when my brain loads up a playlist of my mistakes, I remind myself that I have been forgiven, and repeat, “There is therefore now no condemnation for those who are in Christ Jesus” (Romans 8:1). Sometimes I say it out loud. Sometimes I write it out. Sometimes I put it to music. But the key here is repetition. We have to change a pattern, transform our thinking. It takes work, but you are worth it.

No, I don’t always use Romans 8:1. The Bible is full of God’s promises, and different situations—or different days—prompt me to go to different Bible passages. Come back tomorrow, and we will talk about some other verses you might want to keep handy as you change the tape you play in your head. And I’ll tell you about a great new book I discovered for just this purpose, too!

And in the meantime, when false guilt weighs you down, remember, “For freedom Christ has set us free; stand firm therefore, and do not submit again to a yoke of slavery” (Galatians 5:1).