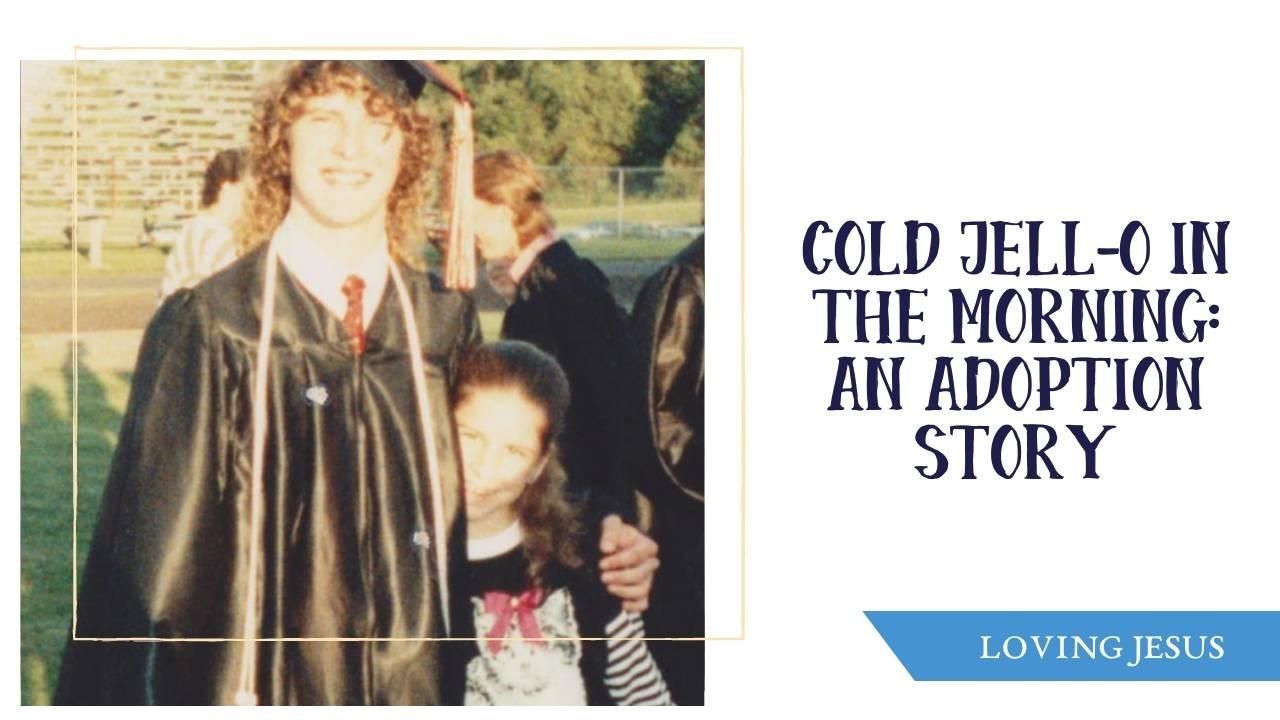 Cold Jell-O in the morning: An adoption story

I was 9 years old the first time I heard that question. I was in fourth grade. We were lined up by the door, ready to head to the buses. The chairs in our classroom were stacked on top of the desks in an attempt to make life marginally easier for the poor custodians who cleaned up after us each night. I still remember the boy who asked the question, the girl who stood behind him, the girl who stood in front of me, all with their eyes on me, all waiting for a glimpse into this reality they couldn’t fathom.

I remember it all so vividly. But what I don’t remember is what happened next. What did I say? How did I answer him? I have no idea. The question caught me so completely off-guard that words failed—my brain failed.

My adoption was hardly a secret. I don’t ever remember being told I was adopted—it was just part of my story. “My name is Katy, I have two brothers, I heart NKOTB, and I’m adopted.” It wasn’t taboo, or even uncomfortable for me talk about. And the boy who asked wasn’t being mean or rude. He was just asking a genuine question.

And yet, it struck me in a way that sent me reeling. What does he MEAN what does it feel like? What on earth am I supposed to say to THAT?

I mumbled something to cover for my discomfort, relieved when we were dismissed to our buses and I was free from the stares of my classmates. I came home to find my older brother waiting for me, and I promptly burst into tears. Yep, every 17-year-old boy’s dream: dealing with a crying girl.

Me & Kurt just a few months after this story happened, at his high school graduation.

Between sobs, I told him what had happened. I’m sure he was as bewildered by my response as I was. Why on earth was it affecting me this way? In a rare (Yes, Kurt, I said RARE. You were 17, after all.) moment of wisdom, he uttered these magical words: “Let’s go shopping.”

Somebody trained that man well.

He took me shopping, not that either of us had money. He took me for ice cream, mainly, I think, because the girl at the ice cream counter was cute. Then he took me home. He never mentioned the situation at school the whole time.

Until we pulled in our driveway and he put his truck in park. “You know,” he started, “the next time someone asks you that… you just tell them, ‘It feels a lot like cold jell-o in the morning.’”

Us again, at another high school graduation… mine this time!

The look on my face was probably quite similar to the look on yours right now. What could that possibly mean?

“Well,” he explained, “if you ask a stupid question, you get a stupid answer.”

You guys, that is absolute gold from a 17-year-old boy right there.

But let’s be fair. It wasn’t a stupid question. And my brother knew that. But he also knew that my adoption was second nature to me. My parents brought me home when I was 48 hours old. I had never known anything different. Asking me what it felt like to be adopted was like asking me what it feels like to be left-handed or to have brown hair. It doesn’t feel like anything—it’s just me.

Now here’s my disclaimer: I know adoption isn’t always like that, even when it happens in infancy. I know that it doesn’t always feel natural. I give my parents and God a whole lot of credit for making it that way for me. I’m not trying to speak for the adoptee community as a whole here, I’m just telling my story.

The point, though, is this: My family who adopted me is, indeed, MY FAMILY. I am fully theirs, and they are fully mine. I felt secure in my adoption. I belonged. I didn’t question it, didn’t worry about losing it.

Our fam. I’m guessing this is… early 90s, maybe? And no, I cannot help you process what is going on with my hair. But check out my oldest brother Eric in his super cool turtleneck and blazer! Ah, the 90s.

That, I think, is why I didn’t have an answer to the question that day. I was so utterly secure in my place in my family—and in how I got there—that it had never occurred to me that it should feel like anything. It just was exactly how it was supposed to be.

A much more recent shot of our crew, looking just as young and wild as we did thirty years ago. Of course.

So what does this have to do with you? Well, EVERYTHING. Because God gave me this adoption story to paint a picture of how He loves each one of us.

You see, the Bible tells us that God loved us before we ever loved him (1 John 1:9). And Romans 8:14 tells us that, if we are led by His Spirit, we are His children. In fact, Paul goes on to say, “the Spirit you received brought about your adoption to sonship. And by him we cry, ‘Abba, Father’” (verse 15, emphasis mine). Abba is a term of intimacy, like Daddy. When we receive Jesus as our Savior, we are adopted—we are fully His, like a child running into her daddy’s outstretched arms.

And when we have accepted Jesus’s sacrifice for us, when we have been adopted into God’s family, we are secure. We are His. He is ours. We belong. It should be as natural to us as breathing. We aren’t servants who are earning our keep; we are dearly loved children who are loved, guided, raised by a caring Father.

Sometimes parent-child relationships are tough. Not everyone who claims the title “Mom” or “Dad” really deserves them. I get that. Not every adoption story is a happy one. I know that, too. But this Father is a good one, and this adoption is beautiful.

So what does it feel like to be adopted?

Here’s what I know: My parents sought me out and loved me before was even capable of loving them back. They embraced me fully as their own. And they continue to love me unconditionally. And God has used that first adoption to paint a picture of His love for each one of us, so that we can better understand His adoption of us.