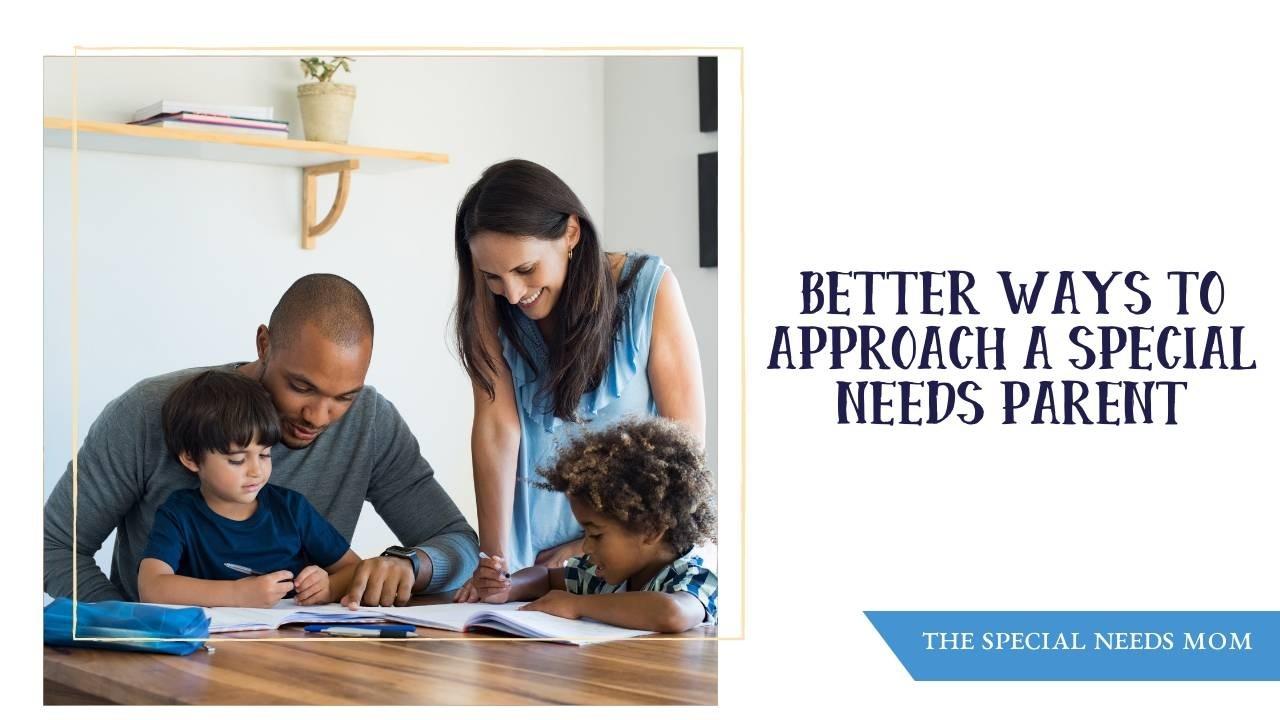 We have had quite an exciting time here in this little corner of the blogosphere this week! On Wednesday, I had the opportunity to share an article on The Huffington Post encouraging parents to talk to their kids about people with disabilities. And wow, what a response it has gotten! I am overwhelmed with the amazing support the post has received. It also brought up an important question, though: If we shouldn’t ask what’s “wrong” with a child, how should we approach special needs parents?

I originally wrote this post a few months ago, but since the question has come up, I’d love to share it with you again…

When Joey was just teeny tiny, his disability wasn’t necessarily obvious from his looks. (I mean, of course, since no one–including several doctors–noticed it for almost the first three months of his life.)

I used to wrestle with whether or not to mention it to the (many, many) strangers who would “ooo” and “aah” over him. If I said something, would they think I was being cruel, pointing out the negative about my child? Or maybe they would suddenly stop admiring him and look at him with pity–or worse, walk away. If I didn’t say anything, would they notice and think that I was ashamed of it, ashamed of him? I was absolutely riddled with guilt until I could finally come to peace with a decision: that Joey’s disability is part of him, but it doesn’t define him. I don’t have to make it the identifying factor of who he is to everyone we meet.

And here we are, 5 years later, and he is still adorable. And people still stop us everywhere we go to admire him. But now, his looks are distinctive.

But sometimes I get so used to Joey and his sweet smile and his infectious laugh and his over-the-top orneriness that I forget what his most distinctive feature really is. Not that people don’t notice his almond-shaped eyes or his delayed speech or even the braces on his feet… but when they first take note of Joey, they see a beautiful bald head. He totally rocks it, of course. But it is definitely a defining quality. And it is just so him that I forget it is unusual.

Thus, when someone asks me, “What’s wrong with him?”, I forget that they are likely inquiring about potential chemo treatments, not a special needs diagnosis.

Friends, I am well aware that my child is different from many, that my family is different. And I truly do not mind questions–I love talking about Joey and raising awareness. I love that I can show people that the journey of Down syndrome is not the scary tragedy I always assumed special needs parenting would be. So this weekend, when I was asked this question three times in an hour, I was taken aback, but I recovered quickly and answered graciously.

But there is something about the question “What’s wrong with him?” that makes me sick to my stomach.

I have learned so many times in life to put myself in the other person’s shoes. If it weren’t for Joey, I wouldn’t know so many of the things I know now. I would say dumb things. I would be well-meaning, but I wouldn’t understand. To be honest, I would probably just altogether avoid talking to someone like me–or Joey. So I am not unsympathetic to people who unintentionally say the wrong thing. My goal is not to shame anyone. But I would like to help others gain understanding.

And in that spirit, let me suggest it is never a good idea to ask a mother “what’s wrong with” her child. I think most people would realize that, if they really thought about it. But often we are in so much of a hurry to say something that we don’t take a beat to think about the best thing to say.

So can I just humbly offer a little help in this area? As someone who has been on both ends of the conversation, I’d love to give you just a few ideas of better things to say…

What is his diagnosis? This is a question I never mind answering. Joey has a diagnosis, and that is clear by observing him. I would much prefer that people talk openly about it than try to pretend it doesn’t exist (which makes it seem shameful) or just avoid him altogether. I do realize, though, that some people are more sensitive than others about this. Also, if you ask that question and you are wrong, it can be hugely embarrassing.

I just had to come say hi! I have a [brother, daughter, cousin, neighbor, etc] with Down syndrome and wanted to meet your child! I love this. It makes me feel like we are part of a dearly loved community. Of course, this only works if you know what kind of disability the person has. It also helps if you can follow it up with a compliment, but try to avoid clichés, such as (in the case of Down’s), “They are always so happy!” This feels like Joey is being reduced to a stereotype and that his personality is owed entirely to an extra chromosome. (And while he IS a very happy little boy, I invite you to try telling him “no” and see what happens then.)

What a cute little boy you have. Tell me about him! This allows the parent to share to his or her comfort level, and places the emphasis on the child as a human being, not a diagnosis.

What a cutie! Yep, this is similar to the last one, but with one important difference… it doesn’t ask anything of the parent. Let me say again that I do not mind answering questions and talking to people about Joey, but sometimes it is nice to feel like people are just admiring him for him and not because he is a novelty to them. This is especially true if you are talking to a complete stranger and someone you will likely never see again. Sometimes it is OK to let your curiosity be unsatisfied and let them be people, not a walking advertisement for diversity. If it’s someone with whom you hope to develop some type of friendship/relationship, it is still OK to just make this statement for now, and ask more questions as you earn more space in their lives.

Here’s what I can tell you about my sweet little boy. He has an extra chromosome in every cell of his body. And by extra, I mean 1 more than you and me. But not 1 more than he “should” have. He has exactly the number he needs to be HIM. He was created by God to be something phenomenal, exactly as he is. There is absolutely nothing wrong with him, except maybe lack of sleep on any given day. But what preschooler doesn’t get cranky now and then?

My friends, life is so beautiful when we can all extend a little grace to each other. But hopefully we can also use our own experiences to help each other grow along the way. Because there are a few things I wish I could go back and teach the Pre-Joey Me. And here’s the main one: Regardless of who is on the other end of the conversation, regardless of my own need to fill the air with words of some kind… take a beat before you speak and say the best thing.