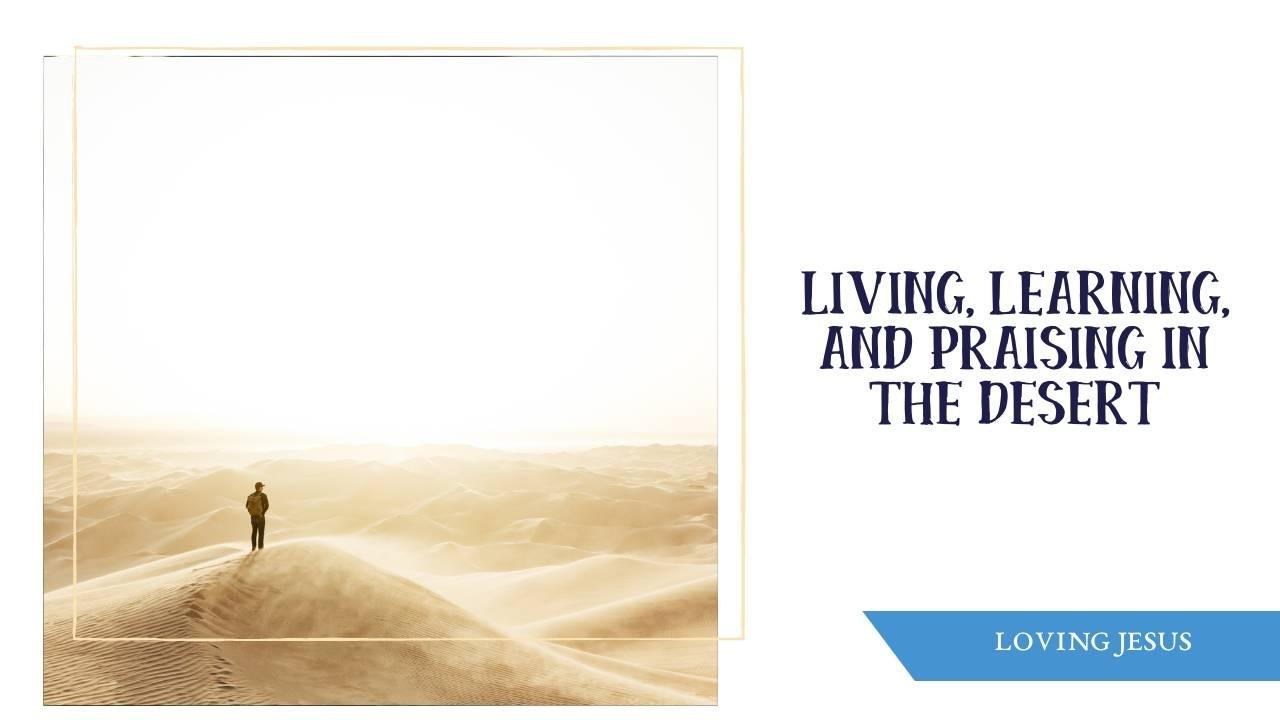 Living, learning, and praising in the desert

It has been four months since Grace came down with a virus that has turned into a nightmare of doctor appointments, tests, and non-answers, as she continues to battle pain and fatigue. Her head and stomach hurt constantly, she gets tired easily, school seems to exacerbate it all (though whether that is physical or emotional, I can’t quite work out), and we are still looking for that light at the end of the tunnel.

A parent never wants their child to be sick, of course, but we recognize it as inevitable. Strep throat, stomach bugs, even the occasional broken bone are all just a part of life. But we usually go into those days knowing that it will be short-lived. We buckle down and get through it, then we look back and say, “I’m so glad that’s over!” Maybe we even learn a lesson from it all. And then we move on. That’s how we think it is supposed to happen.

But what if we don’t get to move on? What happens when we don’t just get through something, but we actually have to live with it? When that temporary job you hate becomes less temporary. When the baby’s colic doesn’t magically disappear after a few weeks. When a disability is diagnosed. When specialist after specialist gives you a different treatment, but nothing helps. Suddenly the “dry patch” you’re going through becomes an expansive desert, stretching in every direction.

For weeks, months even, I begged God to just show us what You want us to learn from this already so that we could be done with it. As if Grace’s sickness were some life-sized episode of Dora the Explorer, where we just need to follow a neatly laid-out map, gather a few key components along the way, and then we’re done! Cue the “We did it!” song! Where’s the dancing monkey???

Now I realize—or more accurately, I’m starting to realize—that life isn’t about getting through tough situations, but about living in the midst of them. Lessons aren’t meant to be found at the desert’s edge, but to be used as guides along the expedition.

One of my favorite Bible passages is 2 Corinthians 12, where Paul talks about his “thorn in the flesh.” Although we don’t know exactly what this “thorn” was (many believe it was a physical ailment, others think it was the constant persecution from the Jews after his conversion, still others—well, let’s just say that theories abound), we do know that it was ongoing and tremendously painful for him. We know that he pleaded with God to take it away on more than one occasion (vs 8). In fact, he says “three times” in the passage, but scholars believe that means three time periods, not just three individual prayers. Paul was living in the desert, and he wanted out.

God answered Paul, but not in the way he had hoped. He didn’t give him an end date—he didn’t promise an end at all. Instead, He lovingly told this man who had given up everything to follow Him, “My grace is sufficient for you, for my power is made perfect in weakness.” (vs 9)

Paul doesn’t tell us how he initially reacted to this revelation, but I have to think it took a minute to sink in. Like maybe he shook his head and said, “No, I don’t think You understand, God. I don’t want You to help me deal with it. I want You to take it away. Maybe we have a bad connection or something. Verizon’s coverage is spotty here.”

But I also think God’s answer was a little tongue-in-cheek: “My grace is sufficient for you.” Sufficient. As in, enough. When in reality, God’s grace is so much more than enough. He could have said so many other things: abundant, never-ending, overflowing, far beyond what you could ever need! But He chose “sufficient”, almost as if He were the owner of Baskin Robbins and Paul was a child who had dropped his cone. “Don’t worry, son. I think I can find you another scoop of ice cream somewhere.”

Paul’s first impulse might not have been to say, “Wow, great! Thanks for the grace, God!”—at least, mine wouldn’t have been. But he soon figured out what a gift he had been given. Not only did he learn to cope with his thorn, he began to look for opportunities to be weak, so that God’s grace and strength could shine through. “That is why, for Christ’s sake, I delight in weaknesses, in insults, in hardships, in persecutions, in difficulties. For when I am weak, then I am strong.” (vs 10)

How can Paul delight in those things? And how can he possibly be strong when he’s weak? That doesn’t even make sense. Except that Paul knows something that many of us don’t. He knows that it is only when we are at our weakest that God can truly shine through. Only when we give up trying to do things on our own that we call out for His strength—and God’s strength, like His grace, is so much more than just sufficient.

I don’t know what desert you’re in right now. I don’t know if you’re ready to “delight” in your weaknesses and trials. I don’t know if I’m ready for that yet. But I know this: God’s grace is sufficient, and it’s ready and waiting for us right now, right where we are. We don’t have to wait until we get to lush pastures to look back and praise God for getting us through. We can lean into Him and learn from Him as we go, and trust that He is God of the desert, too.